Do internet companies have a role in mediating conversations online?

At its heart, this question is fundamentally about responsibility. Which is unfortunate. Because “responsibility” sucks. Responsibility has two things going against it. One: way too many syllables to be taken seriously. Two: since it usually feels thrust upon us, everyone hates it.

Maybe the number of syllables isn’t that important. But I just feel like truth (1), justice (2), honor (2) — even integrity (4!) — are just a bit easier to embrace because they don’t take up excessive tongue real estate.

What’s really problematic about responsibility is that it brings to mind cleaning your room, doing your homework, and cleaning the cat litter. When someone invokes responsibility, it’s all too easy to imagine the same person about to add something like “it builds character.” But seriously: disliking responsibility is a fundamentally dangerous and – frankly – un-American sentiment, but it’s pervasive and rampant.

The State of the Reading

It’s a bit depressing to read articles, think pieces and journals about the role of internet companies in society and expectations of them. Both because the problems we have before us are huge and feel insurmountable, but also because the solutions are nebulous.

But the worst thing of all about conversations about internet companies’ role is that it feels like most laypeople seem to be trying to avoid any semblance of the responsibility that average citizens owe to the discussion and situation. Of all the options, I dislike least people who are thinking about ways to educate and improve people’s literacy & journalism literacy, because it at least might do something about a line of thinking that goes like:

“Look at the state we’re in!”
“Look how we can’t talk about important things!”
“Look how wrong everyone on the internet is!”
“I’m sure it’s Facebook’s responsibility.”

I have a hard time with the thread of logic which leads people who self-select their news sources, convince themselves of their own moral superiority, use Facebook extensively, and un-follow brash people they disagree with to conclude that it’s someone else’s responsibility that our discourse is in the state it’s in. To wit: we did this to ourselves, we created our own situation. We planted these seeds; it’s now our job to harvest, or cull the weeds. 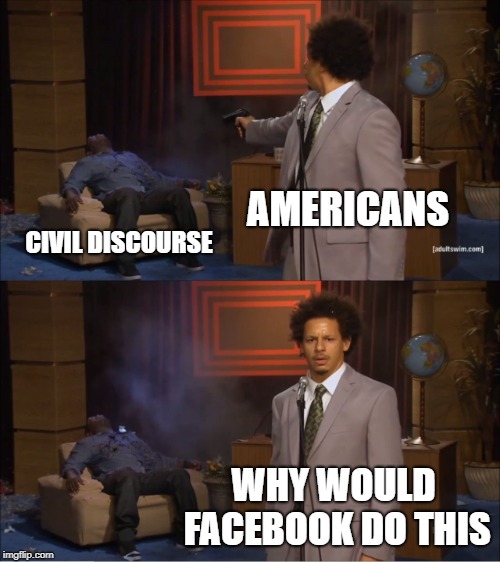 I don’t know the solution. But I sure did think this conversation between industry leaders was fascinating. At a panel discussion, you have the CEO of NYT, Head of News Partnerships at Facebook, Editor-in-Chief of HuffPost, Google News Lab representative, and Director of Research for Reuters. They either know one another decently well, or they were unusually willing to get personal, because sparks flew!

The speech did nothing for me quite as much as it revealed how complicated the problem is. The content creators want their Truth amplified. The platforms want their users to use the site/app more. When those desires align, things go okay. But what does the platform do when what the users want is bad in the eyes of the content creators? Or what does the platform do when the content being created by the “good actors” smells off-putting to the users?

As Sam Gill pointed out in his Medium piece revealing how — paradoxically — many Americans want more regulation for internet companies while using them more and more: “Or, perhaps, people want to eat their vegetables when it comes to staying informed, but acknowledge they’ll devour cookies if offered them instead.”

I think that in its simplest form, the difficulty I have placing blame on internet companies — or even wanting them to do anything about it looks like this:

I don’t think the internet companies are responsible for the state we’re in, and I don’t think regulating or legislating them will get us out of the hole we’ve dug. I don’t have a solution, but I certainly don’t want bright ideas about legal regulation of information getting in the way.

Meanwhile, in other reading…

“A report released by Knight on Thursday finds that most of the accounts spreading fake news on Twitter during the election are still active today — and that “these top fake and conspiracy news outlets on Twitter are largely stable,” because Twitter has not banned them.”